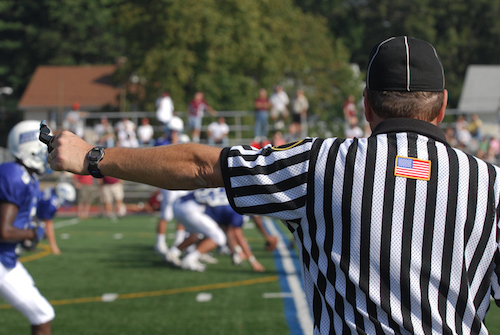 Sports officials need General Liability insurance to protect against lawsuits that arise out of allegations that their negligence resulted in bodily injury (typically to a participant or spectator), property damage, personal injury, and advertising injury. A General Liability policy covers legal defense costs and pays settlements or adverse jury verdicts up the policy limits.

Accident insurance pays for covered medical bills of injured sports official participants on an “excess” basis over and above any existing family health insurance. The policy may be subject to a deductible ranging from $0 to $250 per claim. Given the increasingly violent environment of our current sports scene, this is an important benefit to protect injured sports officials.

Referees and umpires of youth and adult leagues can face lawsuits that arise out of their officiating. Such lawsuits are costly to defend, whether or not they are merited. Accusations of negligence by a sports official have become all too common in our increasingly litigious society as players and parents look for monetary damages when injuries occur.

Negligence claims against sports officials fall into two categories. Bodily injury is one area, which can arise from a failure to inspect the playing field and/or equipment,

The second area calls into the question a sports official’s decision while on the playing field. Such cases rarely go forward as the courts are reluctant to get involved with game decisions unless there is evidence of corruption, fraud, or bad faith. This second category of claim would require Professional Liability insurance.

For information on which states currently have legislation on the books that affects referees and umpires, click here.

Risk Management for Referees and Umpires

Officials deserve to arrive at the game, do their job in a safe environment, and leave the venue safely. Emotions of players, coaches, and spectators run high in sports, so it’s important to decrease risks and prevent bad behavior from happening. Below are risk management steps that officials can take to reduce the odds of an injury.

Prior to the Game