Who doesn’t enjoy a parade?

There’s something about lining the streets to watch and cheer the marching bands, majorettes, beauty queens, clowns, and floats passing by. Parades come in all sizes, from the Macy’s Thanksgiving Day Parade to the Rose Bowl Parade to all the small-town parades on Main Street, USA. 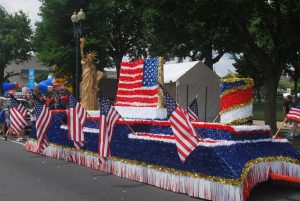 We particularly like seeing our local youth sports team, high school band, homecoming queen, veterans and first responders – people we know and love – marching or riding by on a float.

We don’t like to rain on anyone’s parade, but accidents can and do happen – often with tragic results. Two sports team/league clients of ours were sued after children were seriously injured as a result of falling from a float and being run over. One case settled for about $345,000 and the other is estimated to settle for around $50,000.

Parades are fun for participants and onlookers alike. However, it’s important to be aware of the inherent risks associated with these activities. This awareness allows you to take appropriate precautions and lessens the potential for injuries.

We strongly suggest that you consider walking in the parade rather than entering a float. This drastically reduces the risk of injury to participants.

It’s critical that proper steps are taken in preparing a float prior to its entry in a parade. The safety of the driver, passengers, and bystanders are all at risk if precautions aren’t taken. Below are best risk management practices in preparing and operating a float.

Crazy and unexpected injuries such as falls from parade floats do arise out of the operations of sports organizations. You can never plan for the unexpected and that is why quality sports insurance is vital for the protection of your participants, board members, and volunteers. Please click on the “get a quote” button at the top of this page to get an instant online quote.