Additional claims and the inclusion of more defendants are the reasons behind a lawsuit being refiled against Pop Warner. Donnovan Hill, 16, is the subject of a lawsuit that was filed after being hit during a Midget Orange Bowl championship game in 2011. Hill, 13 at the time, was left par 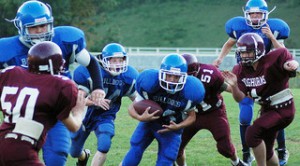 alyzed after tackling a running back.

Details of the amended complaint

Hills mother, Crystal Dixon, amended her complaint to include lack of training for coaches and use of a tackling technique banned by the Pop Warner league. The suit names Pop Warner, league affiliates, coaches, and the local Pop Warner board of directors. Lawyers for Dixon say the defendants are liable for instruction in an incorrect tackling technique. Hill and others on the team complained of pain and questioned their coach about the safety of tackling by leading with the head. The plaintiff asserts that coaches ignored the players’ concerns.

Rob Carey of the law firm Hagens Berman Sobol Shapiro intends to prove that the coaches ignored the coaching guidelines on how players in the league are required to tackle. Carey will provide videotape evidence of Hill’s coaches specifically and repeatedly ordering their players to make hazardous tackles in clear violation of Pop Warner guidelines.

Hill is a quadriplegic confined to a wheelchair and the subject of an ESPN video. Dixon’s attorneys suspect that coaches instructing players to use the dangerous head-first technique is widespread. They are seeking maximum damages allowable by law, including punitive damages and hope the case will help put an end to the dangerous practice.

Pop Warner is currently looking to address other safety concerns in youth football. Visit the Sadler Sports blog for youth football injury statistics and other news.