What we typically think of as a backyard or college quad pastime is now a sport played by professional athletes. An estimated 7 million people worldwide participate in Ultimate Frisbee teams and leagues that evolved from Wham-O’s classic plastic disc. And the sport is now officially known as Ultimate.

It’s popularity leads to injury studies by medical researchers. So far they are learning that the rate is similar to comparable pro sports, such as soccer and football. Ultimate Frisbee involves running, quick starts and stops, aerial passing, and player collisions. The dissimilarity is the lower concussion rates.

University of Alabama at Birmingham researchers published what is apparently the first scientific study of injury rates among professional Ultimate Frisbee athletes. The systematic study offers knowledge on the 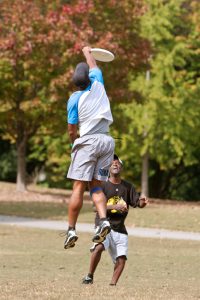 types of injuries most likely to occur, the likelihood of severity and, how best to minimize the risk of injuries. The study results offer quantifiable data, which helps spot trends. Determining trends leads to reducing or preventing injuries through protective gear or changes in game rules.

Hess’s team followed 16 male professional American Ultimate Disc League teams during the 2017 season. His study modeled earlier research by co-author David Swedler of the Pacific Institute for Research and Evaluation, and studies by the NCAA and other professional league sports.

The study measured injury rates as the number of injuries for every 1000 athlete exposures. One athlete participating in one game or practice session is an athlete exposure (AE).

In nearly 9000 AEs, 299 injuries made for an injury rate of 33.36 per 1,000 AEs. This is commensurate with the rate of similar professional-level sports. The most common injuries occurred in the lower extremities, such as thigh-muscle strains, and ankle-ligament strains. Running and collisions each accounted for approximately 30% of all injuries. The good news is the low concussion rate: 0.22 per 1,000 AEs.

Researchers continued collecting injury data in the 2018, 2019 and 2020 seasons for further study.