Players aren’t the only ones with issues at stake

Not everyone involved in the NFL’s proposed $765 million player concussion settlement is ready to sign the agreement. The proposal states that players were never made aware of the concussions risks of which the NFL had knowledge.

Players and families filing lawsuit argue the settlement would not assign blame or offer punitive damages for pain and suffering.

It’s not just about the players

Critics of the proposal note that there are other people affected by the damages resulting from the concussions of the players. 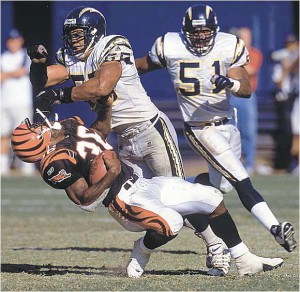 FL linebacker Junior Seau points to the obvious fact that he can’t be compensated for pain and suffering. However, his three children are the ones who are dealing with the pain and suffering in the wake of his death. Seau’s family is objecting to the proposed settlement and plans to file aseparate suit.

Anita Brody, the U.S. district judge who will oversee the settlement, also questions whether $765 million is adequate compensation for all the parties involved. There are approximately 20,000 claims by people involved over a 65-year period.

The push to settle

The majority of retired players in the suit are are not contesting the terms of the proposed settlement, according to lead attorneys Christopher Seeger and Sol Weiss. They state that the retirees are ready to settle and take advantage of the awarded funds.

Younger players and former players suffering from Alzheimer’s disease could be awarded as much as $5 million. But most of the plaintiffs who are dealing with mild forms of dementia would likely be awarded less than $25,000. If the lawsuit is thrown out, they could all end up with nothing.

“This could be a great settlement, this could be a terrible settlement, but I don’t know,” said Thomas A. Demetrio, the attorney representing the late Dave Duerson’s family and nine other players or their families in the suit.

Demetrio also stated that two questions need answered: what portion of the payments will be paid out of insurance and why attorneys will be splitting another $112 million if the case never went to trial.

Please visit Sadler Sports & Recreation Insurance for more information on the NFL settlement,  concussion risks, and sports insurance or to request a quote.