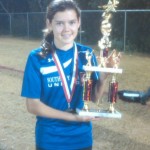 U16 Palmetto II Soccer team on their recent victory!! They won the state championship last weekend for the Presidents Medal Soccer League Division as the fifth seed going 4-0 in the tournament on Saturday and Sunday. Frances, who plays forward, scored two goals 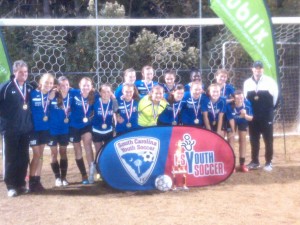 and had one assist in the tournament. Coach Chad Bridges did a fantastic job of getting the team to peak at the end of the season.

The Sadlers unexpectedly became a soccer family when soccer became the favorite sport of all three children, John Jr., Frances, and Heriot. John Sadler became a soccer coach by default for youngest daughter, Heriot, when no other volunteers were interested in the position. He has enjoyed it since.