Archive for the ‘Heat Illness’ Category

Overhydration in Sports Can Have Deadly Consequences

Players must adequately hydrate, but overdoing it can be life threatening

College and high school football teams across the country are currently conditioning and practicing for the upcoming football season. And they’re doing it in the hottest weeks of the summer.

In 2017, University of Texas coach, Tom Herman,  assessed the hydration level of players, and their dedication to the team, based on the color of their urine. The color color-coded chart he developed labeled players with deep-yellow urine “selfish teammates.” Orange to brown-colored urine signified players as “bad guys.”

While I don’t advocate such shaming, the color chart is useful as a risk managementtool. We refer to the importance of hydration and a urine color chart referred to in our article “Guide To Preventing Heat Stroke Death In Youth Tackle Football.”

But apparently fanatical adherence by some has led to the dangerous practice of overhydration. This is also known as exercise-associated hyponatremia. While it’s important that players be mindful of staying hydrated, “hydration shaming” has filtered into high school sports.

Overhydration results from drinking too much water or sports drinks, which dilutes the 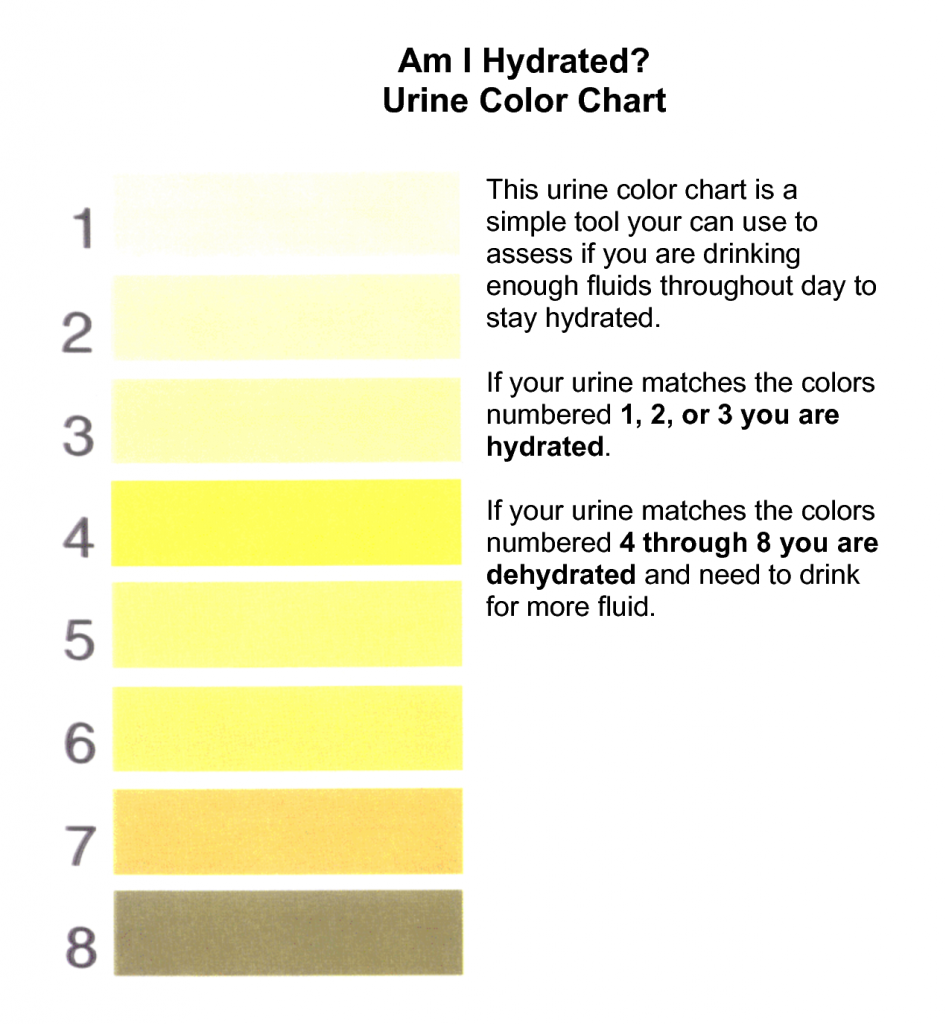 level of salt in the blood. The body fills with more fluids than it can expel through perspiration or urination.  The result is a swelling of all the cells in the body.

Scientists know that the body self-regulates its water balance. All land mammals require water and have a thirst trigger hardwired into the brain that protects the balance between water and salt. When the trigger is ignored, dehydration occurs. Oversaturation of our thirst results in hyponatremia.

Players must drink regularly throughout all physical activities, no matter the temperature. An athlete shouldn’t only rely on his or her sense of thirst to sufficiently maintain proper hydration.

The weather, the sport being played and the size of the athlete all determine how much one needs to drink. Tom Herman’s hydration chart (without the commentary) or similar,  is a good basic tool for assessing your athlete’s level of hydration.

Source: Tamara Hew-Butler. “Young athletes should stay hydrated, but too much water can be deadly.” cnn.com. 7 August 2018.

Is it too early to jump to conclusions?

We’ve all heard tragic stories of kids and pets left unattended in vehicles in hot weather. Some parents and pet owners have simply been distracted for a few moments and suffered the greatest of losses.

One parent, a researcher at the University of Georgia, wondered if bounce houses might pose a similar risk for children. Marshall Shepherd is a professor of geography and atmospheric sciences who saw his own child bouncing in one on a hot day and decided to test his theory. The results of his study, “Do Inflatable Bounce Houses Pose Heat-related Hazards to Children?” was published in the Bulletin of the American Meteorological Society.

Children are more vulnerable to heat exhaustion and other heat illnesses, according to Shepherd’s co-author Andrew Grundstein, also of UGA. Children need to be monitored closely when participating in sports and other physical activities in hot, humid weather. It’s possible they could become overheated in the greenhouse-like environment of a bounce house.

Indicators of potential heat illness can include dizziness, nausea, fatigue, and skin that is moist and flushed.

How hot is hot?

The heat index, where relative humidity is factored into the actual air temperature to determine how hot it actually feels, was also taken into consideration in the study. The difference in the heat index inside the inflatable was considerably greater than that of the air temperatures. The bounce house’s average heat index reached nearly 104°F, or more than seven degrees than outside, while difference at the peak temperature of 117°F was more eight degrees.

The risk to sports organizations

Some sports organizations bring in bounce houses as fundraisers. General Liability policies for sports organizations often have an exclusion for inflatables due to the risks of injury involved. Recent media accounts have cited examples of serious injuries occurring when improperly anchored inflatables have been lifted high into the air during wind gusts. Inflatable or bounce house operators should always provide proof of General Liability insurance with an each occurrence limit of at least $1 million and name the sports organization as an additional insured.

Delay could be fatal

During preseason football practice, numerous athletes fall victim to heat exhaustion and heat stroke, and some will even die. Most cases can be prevented through coach, parent, and player education and by following established guidelines.

These guidelines include preseason physicals or medical clearance, proper hydration, heat acclimatization, equipment modification, activity modification, postponement/cancellation based upon wet bulb temperature index, and recognition/treatment. I was recently reading one of my favorite sports risk management publications, From Gym to Jury, and came across an excellent article that you can read by clicking on the link below.

Could it have been prevented?

While the  death of 15-year-old, Max Gilpin in August 2008 was tragic, it could have likely been prevented. This particular case left many experts in the sports arena scratching their heads.  The experts at “From The Gym To The Jury” commented on this case in their latest edition stating, “In 19 years of reporting court cases involving injury or death at early season practices, this may be the first to result in criminal charges.” The coach, David Stinson, pleaded not guilty in the player’s death.

The most important thing to focus on here is PREVENTION. If you are remotely involved with a youth sports league, each of the coaches, assistant coaches, and volunteer staff need to be made aware of the information that we provide in Heat Illness: Avoidance and Prevention. By following these guidelines, you are helping to protect your athletes from heat illness and your coaches, assistant coaches, volunteers and league officials from being the target in a big-dollar lawsuit.